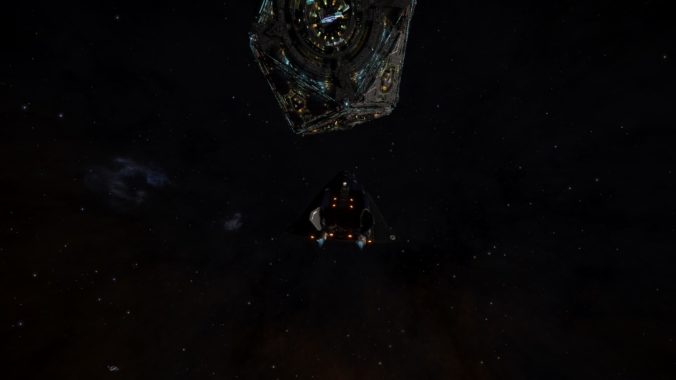 Previously: The year is 3301. Six months after Zachary Hudson was swept into office, Jason Frimantle, a young and unregistered Commander, broke with his father to start his own trading business.

One of these days, I’m going to need to get myself a docking computer.

It wasn’t that Jason had trouble easing the Wayfarer through the ‘mail slot’ of a particular station. His more immediate concern when landing was scraping his ship against the guide rails, or bumping up against other ships. It was a reaction based on how the Federation treated incoming or outgoing Commanders — threats of lethal force were commonplace from traffic control. Jason found the attitude of those along this trading route much more agreeable, for the most part. He guided his ship to the landing pad within Lave Station, feeling the reassuring bump of his landing gear against the solid metal.

The pad lowered into the hangar, and Jason felt the faint pull of the access corridor interior’s 0.2 gravity. One didn’t have to worry about a particularly strong step along a corridor putting one into freefall, but handrails were still highly recommended. He moved from his ship into the corridor with a few long yet careful strides, and took hold of the handrail in the corridor. A few minutes later, he was in the Workers trade station, bringing up his manifest to onload some crates of Lavian Brandy.

The woman at the front desk looked up as Jason walked in. “Commander Frimantle?”

Most of the dealings Jason had had with the Workers of Lave Liberals had been through a contact that worked directly with the system market. Parker was the overseer of the faction’s trade, a subordinate to their leadership; from what Jason had gathered, they were a middle manager who tracked inventory and ship traffic. He wasn’t sure why such a person would want to see him, since he was still starting out in terms of being a freelance trader. Regardless, it wouldn’t hurt to make new friends, or at least establish new contacts. He thanked the receptionist and found Parker’s office.

Parker stood in front of a floor-to-ceiling holo display of Lave’s market, a tablet in one hand and a stylus in the other. She was an older woman, still in her middle years but definitely showing the signs of working hard on her career. She wore a business-style blazer and knee-length pencil skirt that flattered her figure yet projected an air of professional austerity, backed up by the unadorned blouse that came to her neck. Her reddish-brown hair was drawn back in a conservative bun, but the chopsticks holding it in place were lavishly decorated with flowers and branches that seemed to fly in the face of her steely demeanor.

Jason adjusted his jacket, which he’d opened after exiting the Wayfarer, suddenly aware of the fact that both it and his pressure suit were due for a cleaning. His hair was probably mussed, as well, from the last few trade runs being uninterrupted by stopping for anything other than food and sleep. Parker looked up from the tablet in her hand at the motion, looking at Jason over the rims of spectacles that complimented the light brown color of her eyes.

“Commander,” she said, her voice reminding Jason of a schoolmistress. “Thank you for coming to see me.”

“Nice to meet you, Commissioner,” Jason replied. “What can I do for you?”

She turned away from the display to lay her tablet on the desk. Jason noted she was wearing high heels, which couldn’t have been easy at lower gravity. They weren’t stiletto-style, but still…

“I have need of a trader who can take care of a matter of some urgency. Your efficiency in the Zaonce trade route leads me to believe you can accomplish such a task.” She turned back to him, regarding him for a long moment. “Do you believe I am correct?”

Jason nodded. “Lots of Commanders starting out like this run, ma’am. It’s got decent profit margins and there’s enough of a gap between deliveries that no markets get too flooded, nor do they dry up. The items are always in demand, be it Lavian brandy or blue milk.”

“I see you have a head for the greater business picture as well as your own credits. I do believe we can work together.” She picked up a different tablet, took a step towards Jason, and handed it to him. “How is your planetary landing experience?”

Jason regarded the tablet. It was information and telemetry for a settlement called Abel Prospect, located in the Arque system. “I’ve been a spacer all of my life. Making planetfall hasn’t really been a priority, but I’ve done it a couple of times. Usually with my father guiding me.”

Thinking of his father filled Jason with a mix of emotions that weren’t entirely pleasant. He tried to keep that out of his voice, but Parker was studying his expression closely. After a moment, she nodded.

“Very good. The settlement has indicated a need for medical supplies. There has been a minor epidemic of a rare skin disease. None of the in-system stations have what they need to deal with this, and they want to combat it lest it become a system-wide outbreak.”

Jason studied the layout of the settlement and the planetary landscape around it. “I don’t see any landing pads.”

“That is the other concern. They lack the facilities to accommodate starships in the usual manner. They also have no means to take in a SRV. So the supplies must be hand-delivered.”

“0.09 on the surface. They need two tons of specialized medical supplies, and are paying 200% above market price. You will be entitled to 50% of the profits.”

Jason looked over the figures, and hoped he wasn’t suddenly showing signs of his excitement. With that amount of money, he could buy several enhancements for the Wayfarer — a frame-shift drive with longer range, an improved fuel scoop, a more comfortable pilot’s seat…

Maybe even a new ship, he thought.

“I do believe you’ve got yourself a pilot, Ms. Parker.”

“Excellent. The sooner you can depart, the better.”

A short jump or two later, the Wayfarer‘s planetary approach suite was guiding Jason into a low orbit over the rocky body where Abel Prospect had been established. The gravity of the body was negligible, but he definitely felt the tug of it when his ship dropped out of supercruise. The Wayfarer creaked slightly as he adjusted his approach, unused to flying in any sort of atmosphere or planetary gravity. Granted, Abel Prospect’s host body had only the thinnest of gas layers drawn to it during its formation, and a human being would still suffocate in about 15 seconds if they found themselves outside without a pressure suit.

As he made his descent, he checked his radar to ensure a good position for the transfer of the goods. Then he looked again. There was another contact on the surface. He rolled to starboard to get a visual look. A Hauler, smaller (and, in Jason’s opinion, less elegant) cousin to his own Adder, was parked near Abel Prospect’s sole lock. A bad feeling crept into him, tightening his jaw as he sussed out a similar place to put down the Wayfarer.

Once he was settled on the surface, Jason activated his p-suit’s helmet and seals, and did a check of his equipment — integrated oxygen supply, suit displays, utility & gun belt, and so on. He moved aft, unlocked the crates from their restraints, and opened his hatch before pushing them out towards the lock. As he moved closer, he saw that it was still cycling. Quickly, he tapped a few commands into the control panel. He reset the system, then opened the outer door.

Two men were inside, wearing pressure suits, staring in shock at the outer door. Jason gave them a wide grin.

One of them slowly nodded. “Um… yeah.”

Jason nodded, looking over the crates. “Four tons, it looks like. What’s your margin?”

“Undercutting the competition to sell more quantity? Nice.” Before he continued, Jason took in the logo on the crates. He blinked, trying to hold down a sudden surge of shock and anger.

It was the logo of his father’s company.

Without warning, he drew his pistol. Like the flight jacket he’d left in the Wayfarer, it had belonged to his grandfather. It was an old-fashioned ballistic weapon, a revolver, designed to fire without issue in near or full vacuum. He shoved its muzzle against the clear faceplate of the closest trader. The other man didn’t move. Neither of them seemed armed; if they were, their sidearms were somewhere inside their pressure suits. What was the point of that?

“Okay. Before I cycle this lock, you’re going to leave it. And your crates. You’re going to take off, go back to Eravate, and tell my father that he, and you, and any of his other cronies, are staying on your side of the galaxy. Nod if you understand.”

The man nodded. Jason reached behind him with his free hand and opened the outer door one more time.

They obeyed. Jason slammed the butt of his pistol into the controls to close the door and cycle the lock. He turned to the crates — now six in total — and tried to ignore the little voice telling him that, technically, he’d just committed an act of piracy.

But what was his father going to do? Put a bounty on his own son? Elite Dangerous is a registered trademark of Frontier Developments.